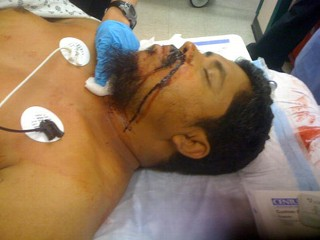 A New York City cab driver was attacked Tuesday evening just after 6 p.m. by a passenger who asked him if he was Muslim, says the NYPD. A spokesman for a New York City cabbie group blamed the attack on the proposed construction of an Islamic center near Ground Zero, the site of the 9/11 World Trade Center terrorist attack, but police said they were not aware of any link.

According to police, passenger Michael Enright, a 21-year-old from Brewster, New York, hailed a taxi at 24th Street and Second Avenue in Manhattan driven by Ahmed Sharif, a resident of Queens.

As the cab headed north on Third Avenue, Enright allegedly asked Sharif, who is of South Asian origin, “Are you Muslim?” When Sharif confirmed that he was Muslim, police say, Enright stabbed him multiple times with a Leatherman knife.

According to a statement from the New York Taxi Workers Alliance, which represents drives, Enright allegedly screamed “Assalamu Alaikum,” a common Islamic greeting meaning “Peace be upon you,” before slashing Sharif across the face, neck and shoulders. Sharif also sustained defensive wounds to the arm and hand.

Police said Sharif, 43, was able to pull the car over and temporarily lock Enright, who had been drinking, in the back seat before summoning help. Enright was lying in the street blocking traffic when apprehended by an off-duty police officer.

Both Sharif and Enright were taken to Bellevue Hospital, Enright for psychiatric evaluation. Enright was classified as an EDP, an emotionally-disturbed person, at the hospital.

“I feel very sad,” said Sharif, according to the Taxi Workers Alliance. “I have been here more than 25 years. I have been driving a taxi more than 15 years. All my four kids were born here. I never felt this hopeless and insecure before.”

“Right now, the public sentiment is very serious,” said Sharif, in what seemed to be a reference to loud public debate over the proposed construction of an Islamic cultural center near Ground Zero in lower Manhattan. “All drivers should be more careful.”

No link to the “Ground Zero Mosque” controversy has yet been established, however. “We have no reason to believe this is anything but an isolated incident,” said an NYPD spokesperson.

Javaid Tariq, cofounder of the New York Taxi Workers Alliance said the grup believes the incident occurred because rhetoric about the proposed Islamic center has become “too hot,” and asked politicians to cool it down.

“This incident happened because the Islamic center has become so big an issue,” said Tariq. “Being a Muslim and having a beard is making us more vulnerable.”

Enright is a filmmaker who had recently traveled to Afghanistan with an organization called Intersections International, a New York-based group that promotes itself as promoting justice and peace across lines of faith. Enright told police he had returned from Afghanistan in May.

In a statement, Intersections International said that the description of the alleged perpetrator of the attack matched someone who had worked with the group as a volunteer.

“Our hearts go out to the cab driver, his family and any person who has dealt with such unacceptable violence,” said the statement.

New York City mayor Mike Bloomberg said he spoken to Sharif, and that the cabbie had accepted his invitation to come to City Hall for a meeting Thursday.

Bloomberg praised the NYPD’s quick response, and said the attack “appeared to have been motivated by anti-Muslim bias. I assured [Sharif] that ethnic or religious bias has no place in our city.”

“This attack runs counter to everything that New Yorkers believe, no matter what God we may pray to,” said Bloomberg.

Enright is charged with attempted murder as a hate crime, as well as assault, harassment and criminal possession of a weapon. He is expected to be arraigned this afternoon.”